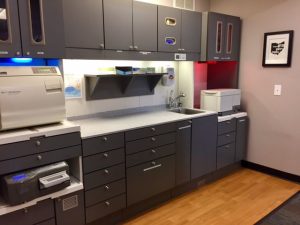 Welcome to David R. Reich DDS, Inc, a family dental practice located in Westerville, OH. Our entire team of dentists, hygienists, and staff are dedicated to providing you with the highest quality dental care. We treat every patient like one of the family, and we’ll go out of our way to make sure you feel relaxed, comfortable, and safe.

For over 70 years, we’ve served the Westerville community with a wide range of dental services. Whether you have a dental emergency, or you’re interested in preventive care, new cosmetic procedures, or something in between, we can help.

The dental practice was originally started by Dr. Robert Taylor in 1951 on East College Ave. in Westerville.  Dr. Taylor taught part time at The Ohio State University Dental School and was later appointed Chairman of the Restorative Department.

In 1960, Dr. Terry Day joined the growing practice. Then, in the early 1970s, the office was moved to the present location at Schrock and State, taking advantage of a new professional building on the growing Southside of Westerville. It was at this time that Westerville native, Gary Reich, joined the expanding practice. Dr. Gary Reich graduated from the Ohio State Dental School in 1969.  He then entered the United States Navy Dental Corps in 1969 for two years. He spent one year at the Chelsea Naval Hospital in Massachusetts and one year as a Navy Dentist with the 3rd Marine Division in Okinawa.  After completing his tour of duty he joined the Dental Practice of Dr. Robert Taylor and Dr. Terry Day in July 1971.  Dr. Gary Reich took over sole ownership in 1987.  He retired from the private practice in July 2009.

In 1981, another Westerville native, Jeffrey Yoest, joined the practice to meet the needs of the growing patient base. He retired May 2022.